We have never been prouder of the statewide EIS team. You have shown up - keeping the doors open and serving clients in a very difficult situation. Your dedication and commitment inspires us to be more. 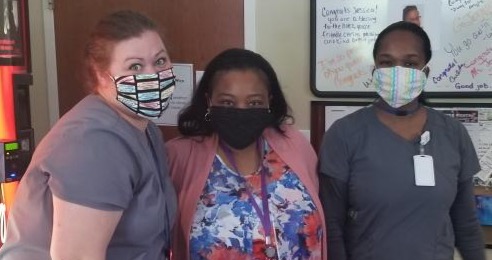 "Whether it’s alcohol or meth doesn’t matter – in dealing with substance use, everyone gets lost – they lose themselves. The point of going into a residential facility is to regain control of your life, to regain your confidence, to be whole again."

Sheila Reed Timmons is Practice Manager at Recovery Place in Savannah, Georgia. She is also Queenie, sometime host of an event called Healthy Love Party. This quarter Queenie invited women in the agency’s residential program to a party – four days of learning to express their sexuality and their love without judgment. Participants were also screened for HIV and HCV.

On the first day, participants are a little timid. “We start out with the fantasy names,” says Sheila. The message: What's said in this room stays in this room. “I don't even know their real names.”

While participants’ ages, backgrounds, and sexual orientation varied, all the women were working to find their way back from a substance use disorder. “Whether it’s alcohol or meth doesn’t matter – in dealing with substance use, everyone gets lost – they lose themselves,” says Sheila. “The point of going into a residential facility is to regain control of your life, to regain your confidence, to be whole again.”

"They don't always get the chance to shine within their own circle because people are constantly looking down on them. But when they come together to help each other they blossom."

When Sheila does a Healthy Love Party she is hoping that by graduation participants will feel better about themselves. “This time, I think they not only felt better about themselves, they felt better about their future – about the next six months of their lives” – that inside the program they would not be judged. “Being judged by people on the outside – that’s going to happen,” says Sheila. “That will happen the rest of their lives; but maybe for the first time, they were not afraid of being judged by the people around them.”

There is a sense of liberation when judgments are lifted and people really try to understand one another said Sheila. “These women are just amazing – they endure so much pain and suffering. They go through their days, their lives holding deep feelings inside. Sometimes you have to open Pandora’s box. But that opportunity doesn't always come up, particularly for these women. They don't always get the chance to shine within their own circle because people are constantly looking down on them. But when they come together to help each other they blossom.”

"I treat clients like they're somebody important - because they are. They're important to me."

When she started doing part time HIV intervention in 2016 says Melanie, “I realized how much I love the work.” When she became full-time, she set out expand Legacy’s EIS program. “I called Althea Mims at the Lowndes County Health Department in the Southern Health District and introduced myself. I told her I would like to collaborate. I think we can reach more people in our community if we work as a team, so I offered to support her outreach efforts.” Before the month was out, Melanie had attended a Public Health Community Consortium Meeting between public health HIV testers and HIV-positive individuals from the community and participated in a 2-day outreach event where she tested 45 individuals.

Her vision for Legacy’s EIS program is to help everyone learn their HIV status. “I think what makes people hesitant about getting an HIV test is that they’re not comfortable - either with the setting or the person doing the test,” says Melanie. To put clients at ease, she greets them warmly and invites them into a private testing area. “I want them to feel comfortable and safe, to feel free to come to me for condoms or to bring a friend or family member in to be tested. So I treat them like they’re somebody important – because they are. They’re important to me.”

Building an EIS Team at Avita

She grew up in the Lower 9th Ward of New Orleans in Louisiana. Like many in the healing professions, Jessie Dickerson, Avita's new HIV/HCV Coordinator, says that she has always been a helper, an identity that was clarified in the 1980’s when she witnessed the impact of HIV on her community. “By the time I was 10 or 11, it was happening right in front of me; I was seeing loved ones die. I knew then that I wanted a career in health care."

Today, Jessie leads the HIV and HCV testing efforts of a team of nurses, medical assistants, and medical technicians from various Avita sites. Recently, when she noticed that several nurses had questions about HIV testing, she took the them through the HIVEIS website to review procedures, answer questions, and remind them about the online resource. ”I want to be sure we are all on the same page,” says Jessie, adding “It’s important to me for the team to know that I am here for them.”

One of the ways that she makes this clear is by helping with testing as needed. “Our nurses are the best; I can’t say enough about them. But there are times when it can be overwhelming to keep up with testing in addition to seeing patients. So when a nurse needs a hand, I drive to the site and help perform tests.”

As coordinator, Jessie also looks for ways to encourage the EIS team. In January, she created a contest and the response was enthusiastic. “They keep asking when the next contest is going down,” says Jessie. “I like inventing things and fun is a great motivator.”

Crediting Avita leadership, and Director of Nursing Mary Donna McAvoy in particular, for much of the success of the EIS program, Jessie says, “I have been working with Mary Donna for at least 10 years; she has been such a help. She’s patient and she believes in me; that makes all the difference.”

During Q1/2020, Georgia's EIS program tested 2,931 individuals for HIV. Of those, 99.9% received their results. Both newly diagnosed HIV-positive clients were linked to medical care. This quarter EIS workers provided on-going support to 92 HIV+ clients, served 25 new clients who were previously diagnosed HIV+, re-linking 16 who had fallen out of treatment to medical care.

During Q1/2020, Georgia's EIS program screened 2,934 individuals for HCV. Of those, 332 tested HCV Ab+ and 228 were confirmed RNA+ or chronically infected with HCV. During the same period, 184 HCV+ clients took the first step in the linkage continuum by completing HCV education and 55 attended their first medical appointment.